By adminNovember 16, 2022News
No Comments

If you have a Twitter – and even if you don’t – you’ve probably heard about the Elon Musk takeover during the last few weeks. Musk’s blustering statements about free speech and censorship have made headlines, but so have criticisms of the mogul’s policies.

Former federal prosecutor Shan Wu has made a recent foray into the national discourse by tweeting a bold condemnation of Musk for enabling hate speech. Read on for more context behind Shan’s most recent viral analysis.

For those who haven’t been following the saga, here’s a quick rundown of the events:

Over the last few weeks, Musk has been making drastic changes to the company’s staff, its internal policies, and the platform’s features.

Since Musk first began publicly boasting about his Twitter takeover, he has claimed that his motivation is to end “censorship” on Twitter and promote “free speech.”

Of course, what Musk is largely referring to is previous leadership’s attempts to curb the hate speech, doxxing, and intentional misinformation that have flooded the platform in recent years.

The latest reports indicate that Musk has laid off as much as 50% of its staff, many of whom were in crucial fact-checking departments. Among the layoffs were members of the curation team, which helps elevate reliable information on the platform, including about elections.

Musk also discontinued Twitter’s longstanding identity verification service (known casually as the “blue check” after the emoji that appears next to a verified user’s name) in favor of a paid subscription service. This could contribute to even more misinformation, as it will become harder to know for sure whether public figures are actually saying what appears on the screen.

The change to Twitter’s verification service has been widely criticized as a dangerous move to make in the weeks leading up to a national election.

On October 26, Shan had enough of Musk’s obvious lies, and offered his take to the Twittersphere. 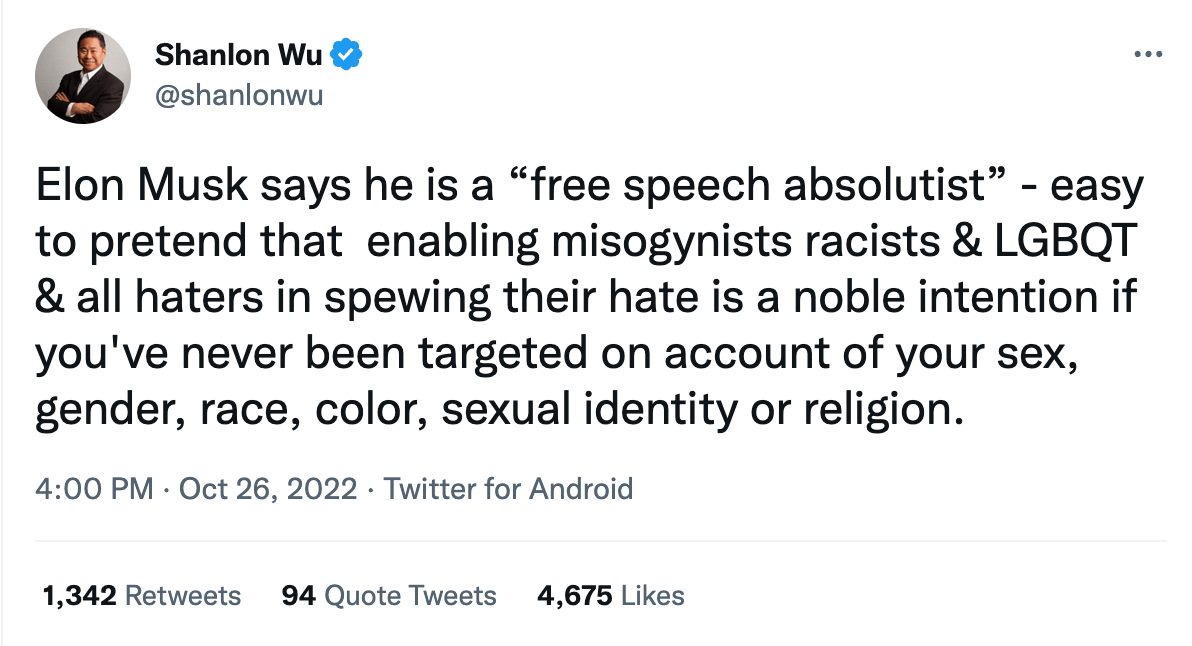 “Elon Musk says he is a ‘free speech absolutist,’” Shan wrote. “[E]asy to pretend that enabling misogynists racists & LGBQT & all haters in spewing their hate is a noble intention if you’ve never been targeted on account of your sex, gender, race, color, sexual identity or religion.”

As Shan pointed out, Musk has benefitted from the privilege of his skin color, gender, and inherited wealth his entire life. In fact, Musk’s father made his fortune in South Africa from an emerald mine operating under Apartheid.

It’s easy enough to turn a blind eye to hate speech and misinformation when you’re not the one who will suffer the consequences.

Research has shown that in the day after Musk officially bought Twitter, use of the N-word increased by 500%. Other slurs and hate speech have also seen astronomical spikes on the platform in the last few weeks.

It’s time for government regulators, elected officials, and everyday users to step up and fight the spread of bigotry and fascism on online platforms.

Will the FBI arrest Trump before the Midterms?