In the leadership offices at the Justice Department, one’s stature is marked by the difficulty of the matters placed in one’s “portfolio.”  Margolis had the most difficult ones; including being tasked with the search of White House Counsel Vince Foster’s office after Foster’s suicide during the Clinton Administration, and deciding whether to seek discipline for the Department lawyers who had authorized the practice of waterboarding.  The many behind-the-scenes recommendations and advice he rendered were legion.  Like Forrest Gump, Margolis would have had a hand in every major event involving the US Government in the last half-century.

For me – a young lawyer and newly appointed counsel to the Attorney General of the United States – meeting Margolis was a rite-of-passage.  In my very first meeting at which he was present, I was blissfully ignorant of Margolis’ stature.  He looked stern and was wearing what I came to know as his “unreadable” face.  The meeting – about some long forgotten policy memorandum – was a typical higher level staff meeting: I was representing the Attorney General while Margolis was representing the Deputy Attorney General and several supervisors from the sections affected by the issue.  After some intense discussions about the merits of the memorandum (to which neither Margolis nor I contributed) the various supervisors decided the memorandum should be given to Attorney General Reno to sign.  They turned to me and asked me if I agreed and, if so, would I deliver the memo to her.  Knowing nothing about the merits of the matter, I relied on instinct in answering:  “I think Eric should sign” – referring to then Deputy Attorney General Eric H. Holder, Jr.  There was moment of silence in the room when literally every head turned towards Margolis as this unknown newbie had just suggested passing the hot potato to Margolis’ boss.  Margolis paused for a moment and then gave me a broad grin.  “Shan’s right,” he said.  “The Deputy should sign.”  In this small exchange, I later understood I had accomplished two things:  (1) I had protected my principal – the Attorney General – from potential responsibility over a controversial issue; and (2) earned Margolis’s approval.  The latter would prove a far more enduring accomplishment in my tenure at the DOJ.

In later years, after I had left government service, Margolis would sometimes greet me with a full body hug and bounce his somewhat protruding stomach against me.  “You look skinny,” he would say, “yah No-Good – you gave all your fat to me!”

In the private sector, I had a case defending a client in an internal DOJ investigation and had tactically delayed the interview.  I heard through the grapevine that Margolis was furious with me for having stonewalled the investigation but he still gave me the stomach-bump the next time I saw him.

The last time I saw him was after the DOJ-wide event commemorating his fifty-years of service.  I asked him if he was retiring.  He said:  “Nah, that would make too many people happy.”

Some years ago, I was attending an evening professional dinner – a big gala event at one of the D.C. hotels – with several hundred other guests when  I noticed black SUVs at the side door and a couple of FBI agents in the back of the room.  I was surprised because I was not aware of any high-level government officials in attendance.  Margolis approached me with an agent standing nearby.  He gave me the stomach bump and I kidded him, asking:  “Are those guys for you?”  He replied:  “I’m the Acting tonight.”  That meant the Attorney General, Deputy Attorney General and the Associate Attorney General were unavailable for some reason.  So Margolis was the acting Attorney General of the United States for the night.  He left the event early and I stood on the second-floor balcony watching an old, white-haired man wearing a trench coat, walk slowly across the lobby.   I’m sure he chose the trench coat deliberately – it had a very John Le Carre spymaster touch.  Trailing behind him on either side separated by a few feet were two FBI agents and, in the proverbial mark of government power, another agent walked ahead of him “on point” to complete the security wedge.  Inside that cleared space he walked alone in the isolation that accompanies power.  A career civil servant standing in for a member of the President’s Cabinet.  The ordinary doing the extraordinary.

That was David Margolis. 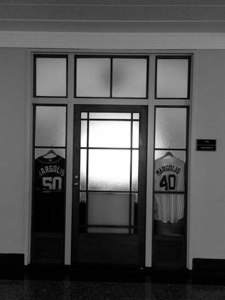